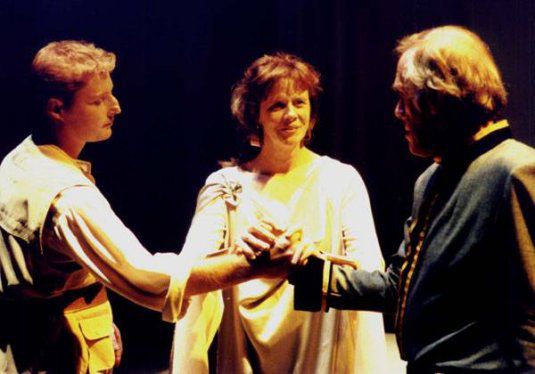 Performed 7th to 11th November 2000 at the Kulturfabrik, Esch-sur-Alzette.

The show was held in an old abattoir in the small village of Each-sur-Alzette. We arrived early on the Saturday night to bag the best seats then we were introduced to the stage manager Pauline Lloyd, [you could tell she was Stage Manager by the broom in her hands].

To say the set was empty would be an understatement, [I think Peter Brook would have approved]. They stayed away from the standard arch and box set and used a thrust stage a style preferred by NWTC members (with a nod to a main practitioner Anne Bearne who always directs in the round or at least a thrust stage). Trees surrounded us, the square stage floor was covered by a sand-coloured carpet and a white cyclorama. To the side of the cyc there was a piece of board with the corner of a temple roof painted on it.

So……… we are in a clearing, we are near the sea, outside a temple. See, simple and clear, no flats painted like the sea, no scaffolding covered in plaster of Paris. Just clear instructions to the audience who can now sit back knowing where they are and relax.

Iphigania. (Jan Horsburgh) dressed in virginal white enters this place, gives thanks to her god and through her speech to herself sets the scene. Jan’s confidence in her abilities as an actress shine through in the play.

She gives us the strengths and weaknesses of Iphigania who could easily be played as weak and naïve. Jan shows us the feminist side and Iphigania’s struggle to do “the right thing” whatever the cost.

Enter then Arkas, a courtier (John Brigg). John offers us a simple man who knows his place in society and that his loyalty to his King is unquestioning.  He does this successfully by confidently underplaying the role.

We know that Arkas is an important man because of the badge of office he wears with pride. This simple but effective piece of costume design highlighted to me the skill and effort that the costumes designer/creator Joey Adams brought to the production. The pure white veil of Iphigania, Arkas’s badge and the most impressive and pleasing to the eye, the gold robe of the king.

Thoas, King of the Taurians was played by (Chris Bearne). Chris swept on to the stage as if he owned the world, and as far as Thoas is concerned he does. Yet, Chris gives us the peaks and troughs of royal life. We not only see a King but also the man. Trying to strike up a partnership with Iphigania, Chris gives us the loneliness that only the truly powerful can feel. Just as Iphigania fights to do what’s right, Thoas does the same for his country and himself. But like so many men before, pride and duty cloud everything.

The final players in our story are Orestes and Pylades.

Pylades. (Chas Warlow). Pylades is Orestes’s childhood friend and confidant. Chas has the problem of playing the only up-beat character. He does this in spades. Very confident portrayals, which again, like all of these characters, could be overdone. Chas is up beat but never over the top, never playing for laughs. He knew the audience would like Pylades so by understating him, we did.

Orestes, (Gavan Guilfoyle) when an actor’s first line is “The only road for me is death”. You know this has to be a Greek play. The Furies pursue Orestes, who is Iphigania’s bother and killer of his mother and her lover, definitely a Greek play. In his mind his pain and suffering is very clear to him and so also to us. The part of Orestes in the hands of a less talented actor would be seen as pathetic or worse funny. But in the hands of Gavan, someone who believes in and feels everything he does, we cried for him and laughed with him. When Orestes “sees” his ancestors in hell we see them too. Such was the strength of this audience members were looking-off stage, where Orestes looked, convinced there were actors there playing the ancestors.

Anthony McCarthy handled the lighting, which cleverly showed the passage of time. Unfortunately if there is a down side I feel it was in the directors unnecessary use of excessive lighting. I understand that the play takes place during one day but I do not need to see the light changing every minute. There were times when the actors were only a few feet away and I could not see their faces. It is always a good idea to imply the passage of time but not at the expense of putting your actors in the dark.

The music was specially composed by Mick Swithebank and was used to good effect in the performance.

This type of play is a real challenge for any director so when one realises that this was Edward Seymour’s first time one can have nothing but admiration for him. Edward had translated the play and passionately wanted to see it performed. He resolved to direct himself and if his decision on casting is anything to go by he will go far. He used the space well, created an intimate setting for this dramatic play where the audience was complicit in the action. His understanding of the text was clear from the acting and though the story is heavy the audience were captivated all the way. He could maybe have used more levels for the actors to play with but this in no way detracted from the enjoyment.

To sum up – We came, We saw, We had a bloody good night out. Promise.

I really enjoyed working on this but not for the obvious reasons. The sunrise/sunset was an ambitious effect and I learned how NOT to do it in future.