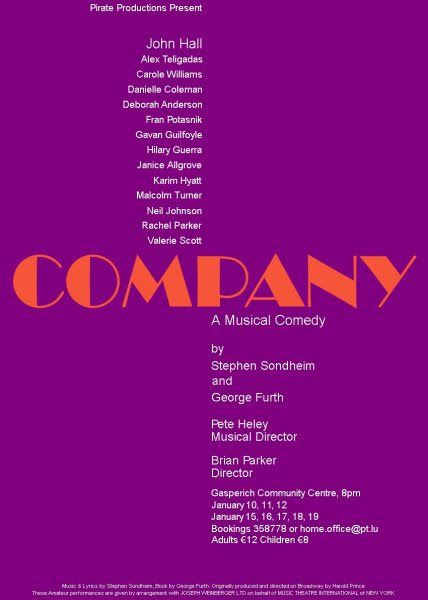 The new presentation from Pirate Productions is the modern musical comedy ‘Company’. Stephen Sondhiem collaborated with George Wurth (book) and Harold Prince (director) to create this show, the first of the Sondhiem/Prince shows that broke the mould of the traditional Rogers and Hammerstein style musical. ‘Company’ was the first non-linear, “concept” musical, thus the song and dance numbers fit into the text as commentary on the action rather than occurring within it. Sondhiem typically wonderful score includes such well-known songs as “Side by Side”, “The Ladies Who Lunch” and “Being Alive”. Set firmly in, and often about, New York, ‘Company’ follows five married, once-married, or soon-to-be-married couples and their mutual friend, Robert, a 40-year-old bachelor who has been unable to connect in a long-term relationship. The relationships are presented in a series of vignettes, primarily through Bobby’s eyes, so that we see the less-than-ideal aspects of commitment. On the way the show takes in such diverse topics as ageing, drugs and one-night-stands.

Pirates’ production of ‘Company’ was directed by Brian Parker and musically directed by Peter Heley.

“Last evening we arranged for a live feed of the opening night of ‘Company’ to be broadcast here to us from Luxembourg. What a super show!! And I mean show. The cast is ‘up close and personal’ with the audience, and this serves to magnify the excitement of it all. Great voices, great acting, clever staging and genuine creativity abound. In fact, are they acting, or is it simply the more amusing side of real-life relationships developing onstage before us? There were so many highlights that at times they virtually overlapped one another. I was truly entertained from beginning to end, and I’m going to see it again with pleasure. Well done to Brian Parker, Pete Heley, the wonderful cast masterfully led by John Hall, the musicians and all the crew who added their special touches to the magic (not the least of which was Munsbach-trained Geoff Stevens, the virtuoso Page Turner, who didn’t miss a single page).

Anyway, you’re probably wondering whether I liked it or not – well, yeah, I did :>].”

“We have only recently returned from Cloud 9 after experiencing ‘Company’. Munsbach rules again! Brian Parker’s production of this musical comedy was pure entertainment. In spite of being dogged by illness the cast all performed brilliantly. It was funny, sad, a delight to ear and eye. Hearty congratulations to everyone involved with the production for giving us something really special.”

My best yet! It was great to work with a Director who could articulate his ideas and create the illusion that we had planned the smallest detail. Some great atmospherics on a diamond shaped acting area. This was a fun and frantic production that gave me inspiration for the future.